Chuck Yeager is a West Virginian pilot who was a fighter ace in World War II, was shot down over occupied France, evaded capture, became a U.S. Air Force test pilot at the very beginning of the jet age, led fighter squadrons and wings over Korea and Vietnam, and became the first pilot to officially break the sound barrier on October 14, 1947.  He performed the last feat hiding a set of broken ribs from his boss and the flight surgeon, and the flight profile didn’t actually call for the barrier to be broken that day.  The man is a genuine badass. 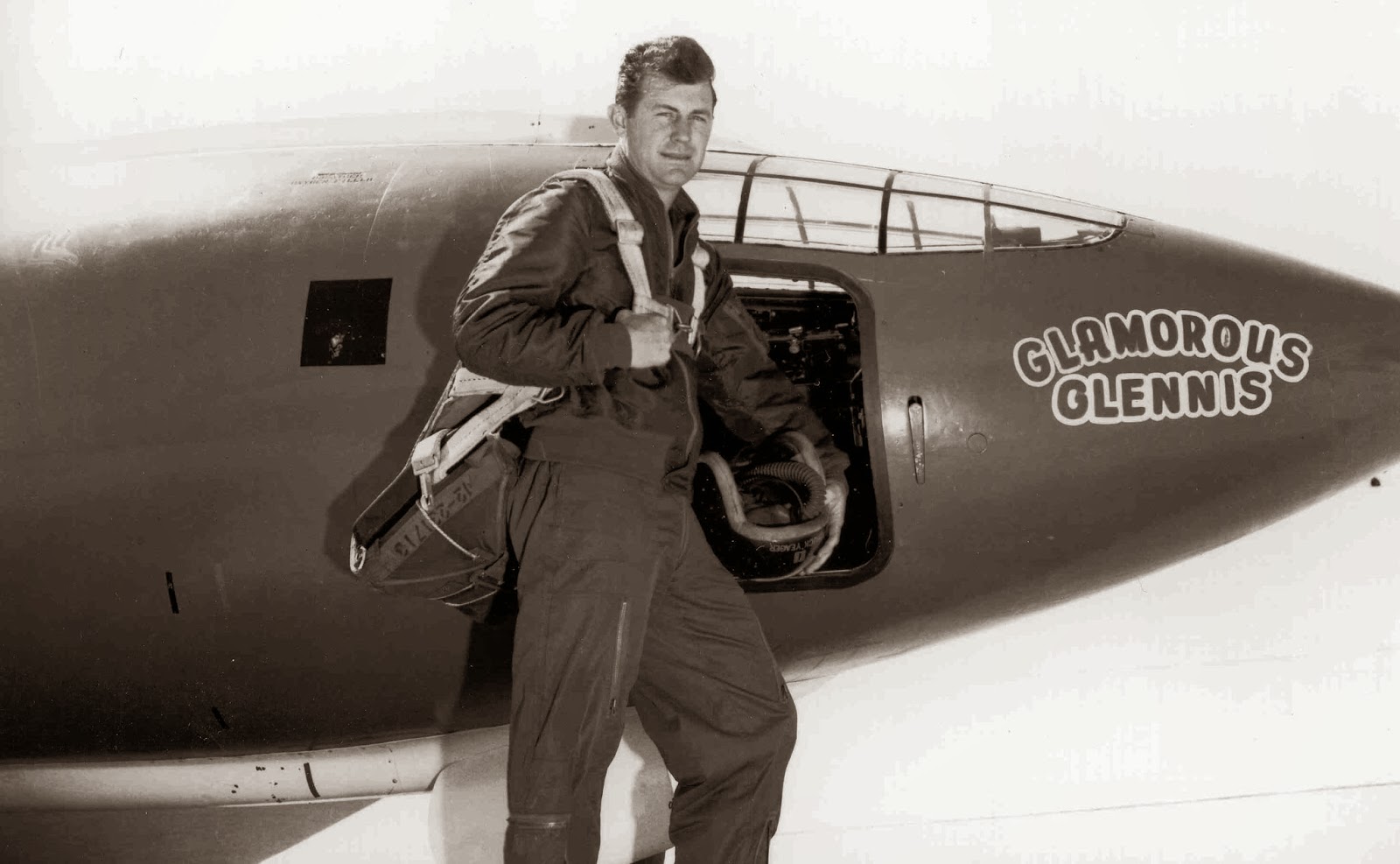 He touched American culture in another way, however, as explained by Tom Wolfe in his 1979 novel, The Right Stuff:
Anyone who travels very much on airlines in the United States soon gets to know the voice of the airline pilot… coming over the intercom… with a particular drawl, a particular folksiness, a particular down-home calmness that is so exaggerated it begins to parody itself… the voice that tells you, as the airliner is caught in thunderheads and goes bolting up and down a thousand feet at a single gulp, to check your seat belts because 'uh, folks, it might get a little choppy'…   Who doesn't know that voice! And who can forget it, - even after he is proved right and the emergency is over.  That particular voice may sound vaguely Southern or Southwestern, but it is specifically Appalachian in origin. It originated in the mountains of West Virginia, in the coal country, in Lincoln County, so far up in the hollows that, as the saying went, 'they had to pipe in daylight.' In the late 1940s and early 1950s this up-hollow voice drifted down from on high, from over the high desert of California, down, down, down, from the upper reaches of the [Pilot] Brotherhood into all phases of American aviation. It was amazing. It was Pygmalion in reverse. Military pilots and then, soon, airline pilots, pilots from Maine and Massachusetts and the Dakotas and Oregon and everywhere else, began to talk in that poker-hollow West Virginia drawl, or as close to it as they could bend their native accents. It was the drawl of the most righteous of all the possessors of the right stuff: Chuck Yeager.

Yeager's unconcerned, modulated speech pattern - twang and all - was copied from pilot to pilot until it diffused out of the test pilot program into general aviation, where you have heard it while flying yourself.  And from there it diffused into other fields - like EMS.  This pattern is something that we all should aspire to when on the radio.  Not the Appalachian twang, necessarily, but the calm, unperturbed professionalism.  When I am on the radio or the biophone, I try to make it so that a listener can’t tell if I’m in the middle of the hairiest scene ever or a call we’ve each run three times that day.  I strive for the same calm, clear, professional voice – unruffled, no matter what.

It takes five seconds to think about what I want to say, take a relaxing deep breath, and make a conscious effort to channel General Yeager.  But those five seconds are a worthwhile investment rather than transmitting a weepy shriek for additional units.  It sets up the rest of the call for success or failure by establishing the mindset for the other involved people.

“Uh, Dispatch, Ambulance Five.  This will be a MCI with at least four critical GSW victims. Can I get three more ambulances and a supervisor to this scene?  And can you give preliminary notification to the ED when you get the chance, please?”  Modulate the tone to a conversational pattern, speak clearly, and slow your speech.  It is the equivalent of saying, “Uh, folks, this is the flight deck.  Hope you’re having a good flight.  We seem to have had the right engine tear plum off the wing.  So I’m going to have to illuminate the seat belt light and, um, ask you to go ahead and return to your seats…”

When I think about it, it is important to practice this habit beyond radio transmissions and phone calls.  Think about how a family will interpret shouted, excitable orders and big arm gestures versus the calm direction of a scene by a professional who ‘has it under control.’  Think about how a patient interprets: “Jesus, dude! We’re losing him! Put your foot down!” versus asking for a bit more speed in the transport in a conversational tone.  It doesn’t matter what your brain is screaming at you – act like you’ve got everything under control.

I will also admit, when I think about it, that panicked shrieking is helpful in some cases.  In my system, we have the ability to communicate directly to the police on their patrol channels.  For a bunch of reasons, it is best to call for help directly on the police frequency.  Shrieking for help in that case also sets up those personnel with the mindset that I want.  There had better be a really good reason to have every cop in the city speeding to me with their fangs out, cause someone is likely to take a whoopin’.  But those situations do exist, on occasion.

In general, however, sounding all worked up and panicked is definitively not the way to look cool.  And “Look cool” is EMS Rule #2.  So channel “the most righteous of all the possessors of the right stuff” when you’re on the radio – General Chuck Yeager.
Posted by Unknown at 20:12
Email ThisBlogThis!Share to TwitterShare to FacebookShare to Pinterest